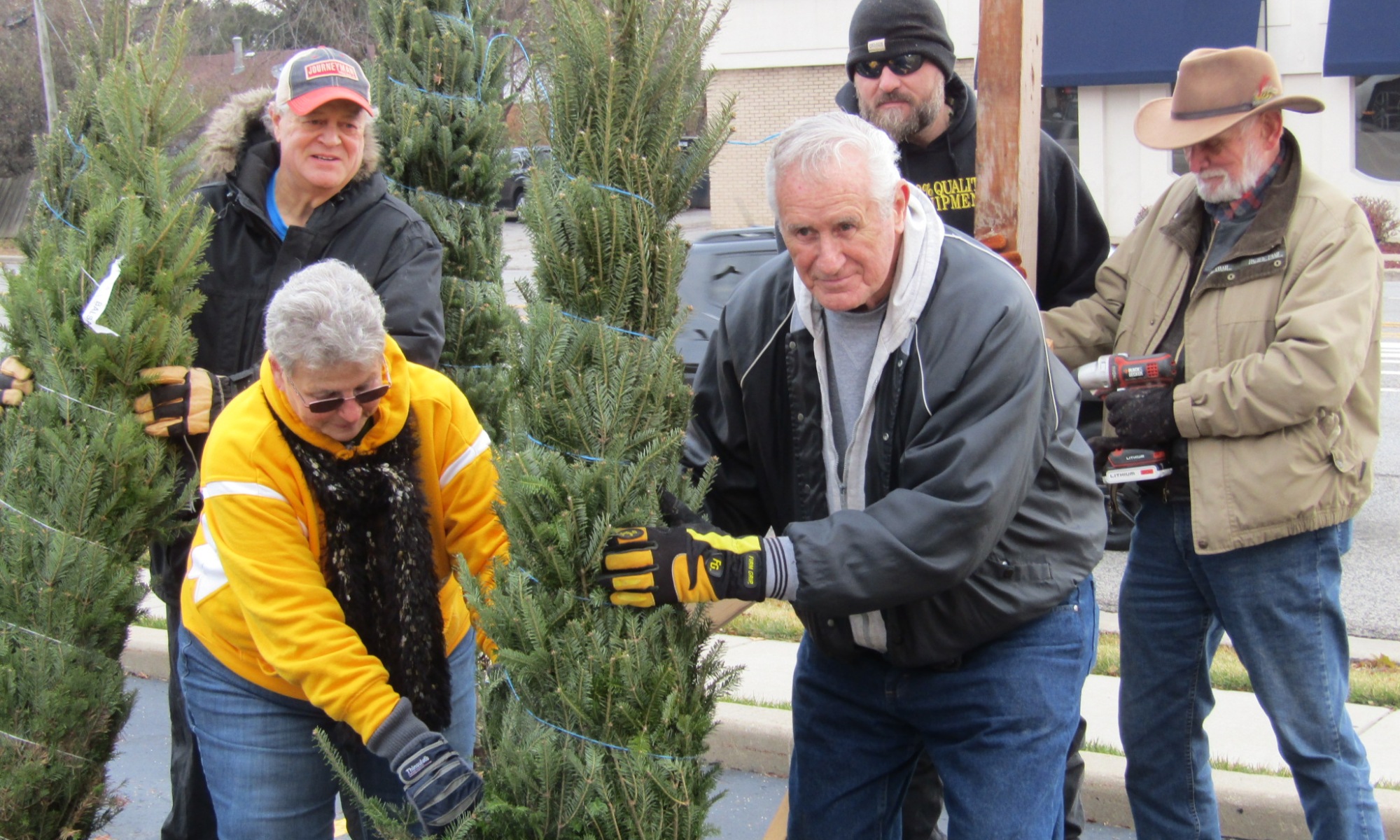 More than 30 members of the Stagg High School boys soccer and basketball teams showed up early and ready to work at the sales lot near the northwest corner of 127th Street and Harlem Avenue in Palos Heights.

The athletes made short work of unloading 517 trees trucked in from northern Wisconsin. “Thank God for youth, for all their help,” Lion Clarence Sindelar, of Palos Park, said as he watched the teens get the job done.

The Lions sell Fraser firs and balsams. The trees range in price from $45 to $140, depending on their size, said Gene Adams, a former president of the club. The tallest trees, 14-footers, cost more.  Wreaths are also available. Measuring 24, 30 and 36 inches in diameter, they cost $24 to $60.

The tree lot is open 9 a.m. to 6 p.m. weekends and noon to 8 p.m. weekdays. In the last few years, trees usually sell out within three to four weeks. The annual Christmas tree sale is the Palos Lions’ biggest fundraiser of the year.

“It’s a wonderful day to unload trees,” said Palos Heights Ald. Jack Clifford (2nd Ward), a longtime Lion. “The benefit of this goes to help those in need in the Palos area.”

The Lions use the proceeds raised by their tree sale to purchase $100 gift cards that they give to 55 local people and families going through hard times to buy groceries, Palos Lions Club President Herb Schumann said as lifted trees to put into stands.

Atop the flatbed trailer piled high with trees to unload, Stagg basketball player Essam Baraka, of Palos Park, said: “Man, I just like helping the community. It’s the whole reason I’m here doing this. It feels good to do something good.”

Boys soccer head coach Mike Kealy has encouraged his players to lend the Lions a hand for 10 years. “It’s something we feel very strongly about as far as giving back to the community,” he said. “The boys really enjoy coming and helping out.”

It’s not easy for Lions club members, many of whom are in their 60s, 70s and 80s, to climb on top of a truck trailer and unload trees, Coach Kealy noted. “This is a young man’s job.”

“It’s pretty fun because you get to hang out with your friends and help the community,” freshman soccer player David Kuczek, of Hickory Hills, said of the morning’s labors.

It took only 45 minutes for the youngsters to unload the trees, Lion April Schrader noted. She and Lion Colleen Schumann laid a table with boxes of doughnuts, sweet rolls, hot coffee and gallons of milk to treat the young workers.

Mose Rickey, director of Palos Park’s Recreation Department, has helped put up the tree lot for both of his two years as a Palos Lion. “Watching these guys unload the trees is like watching a swarm of ants devour a Popsicle on a sidewalk,” he said. “It all goes by so fast.”

Meanwhile, Lions Tom Bump, Roby Schrader, Bruce Frazer and Larry Wiles, among others, put in their time to prepare the tree lot. Schrader drilled holes to bolt together wooden supports he built.

The tree sale wraps up a busy fall for the Palos Lions Club, celebrating its 70th anniversary this year. Marking that milestone, the club hosted a gala, honoring Palos-area first responders, in October. It held a football night out for a Bears’ game on Nov. 17 at Mama Vesuvio’s East and gave a $2,000 donation to The Center during the club’s monthly dinner meeting last Wednesday inside The Center’s lodge.