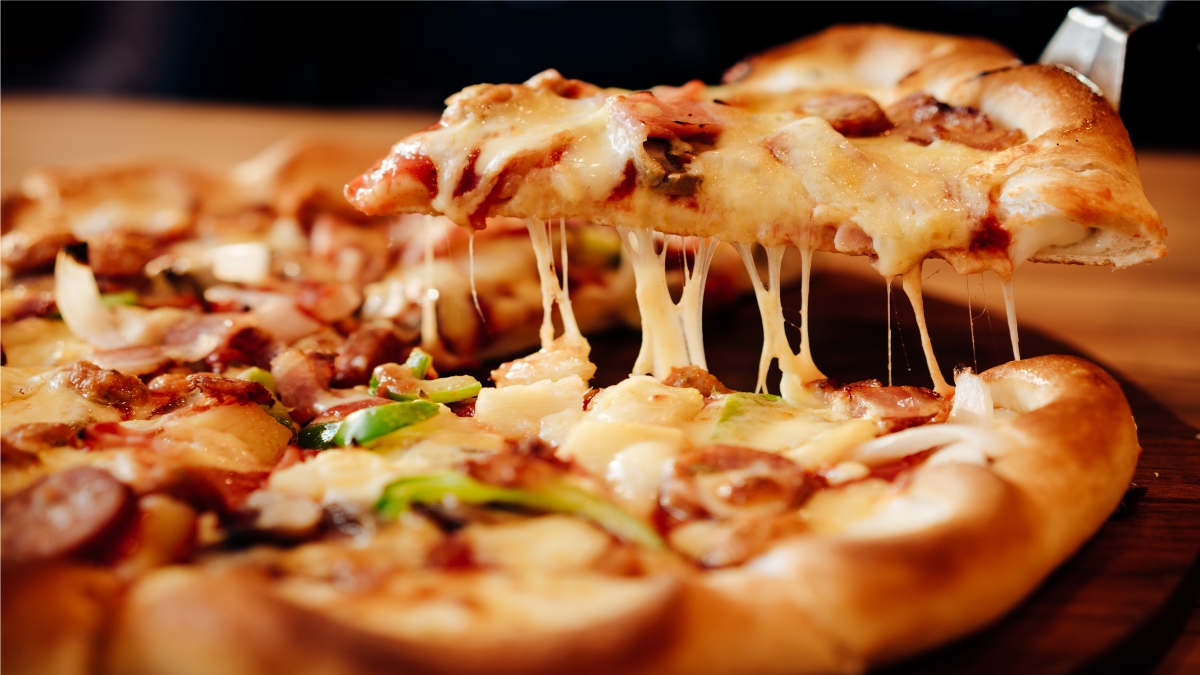 There’s no such thing as a free lunch, the old saying goes.  But just leave it to the snackoisseur to prove them wrong.

I worked as a poor small-town newspaper editor when my wife and I were dating, but on Sundays during football season I knew of the perfect cheap date.  No fan of football, I became a big fan of the free pizza a local pizzeria served during halftime.

Timing it just right was the trick. With my girlfriend in the passenger seat of my old Honda, I turned on the radio just before halftime and drive toward all that free pizza awaiting us. There was no point in arriving too early before halftime and having to watch more of the game than necessary. I would either get gas or drive up and down streets to waste time until halftime started because, as I told my girlfriend, I’d rather watch paint dry than watch football.

As we entered the bar literally moments before halftime, we were sure the bartender who watched our familiar weekly halftime entrance was thinking to herself, “Oh no, … here they come again.” She knew we were there to scarf down the pizza and not watch the game.

Invariably we arrived just before the servers put out several varieties of free pizza – thin crust cheese and sausage, pepperoni, the “works” with mushroom, green pepper and onion, and also stuffed and deep-dish pizza. One time, we arrived just as they were serving the pizzas – that was a red-letter day because I had to watch absolutely no football. We always sat at the bar near the tables that would soon be loaded with pizzas, so that I could be first in line. I loaded my plate high with pizza.

Of course, we had to spend some money to justify our feasting. So, I ordered a Coke and my girlfriend sipped seltzer water.  She told the bartender, who was about college age, not to major in history or political science as I did, or psychology as she did. She explained that the job opportunities for those majors are less than lucrative. Then you’ll end up like us, snagging free pizza at halftime in bars.

The pizzeria loaded the pizza with plenty of sausage. You could smell the fennel and other spices emanating from it, fresh out of the oven. Thick, gooey cheese covered the pie. Plenty of crushed red pepper added even more flavor to the decadent slices, oozing with stringy cheese. The crunchy crust became chewy in my mouth.

Even though I piled my first plate high, I always went back for seconds. We feasted, chatted and ate our fill, but never stayed for the second half after we finished our pizza and drinks.

Other ways to save money besides free pizza on football Sundays could be found. All-you-can eat pancake breakfasts served by local churches or other community groups were a favorite. I always got my money’s worth, spending $5 for two or three stacks of tender, moist hotcakes. Rummage sales were my go-to retail outlets to stock up on used shirts and pants, Always with missing buttons, I relied on my girlfriend to sew them onto my purchases for me.

So, for all you poor writers (and other poor schlubs), I offer this piece of advice.  Look for local pizza establishment that offers free pizza at game half times.  Not only is this a wonderful cheap date, it’s a good way to get a good solid meal.